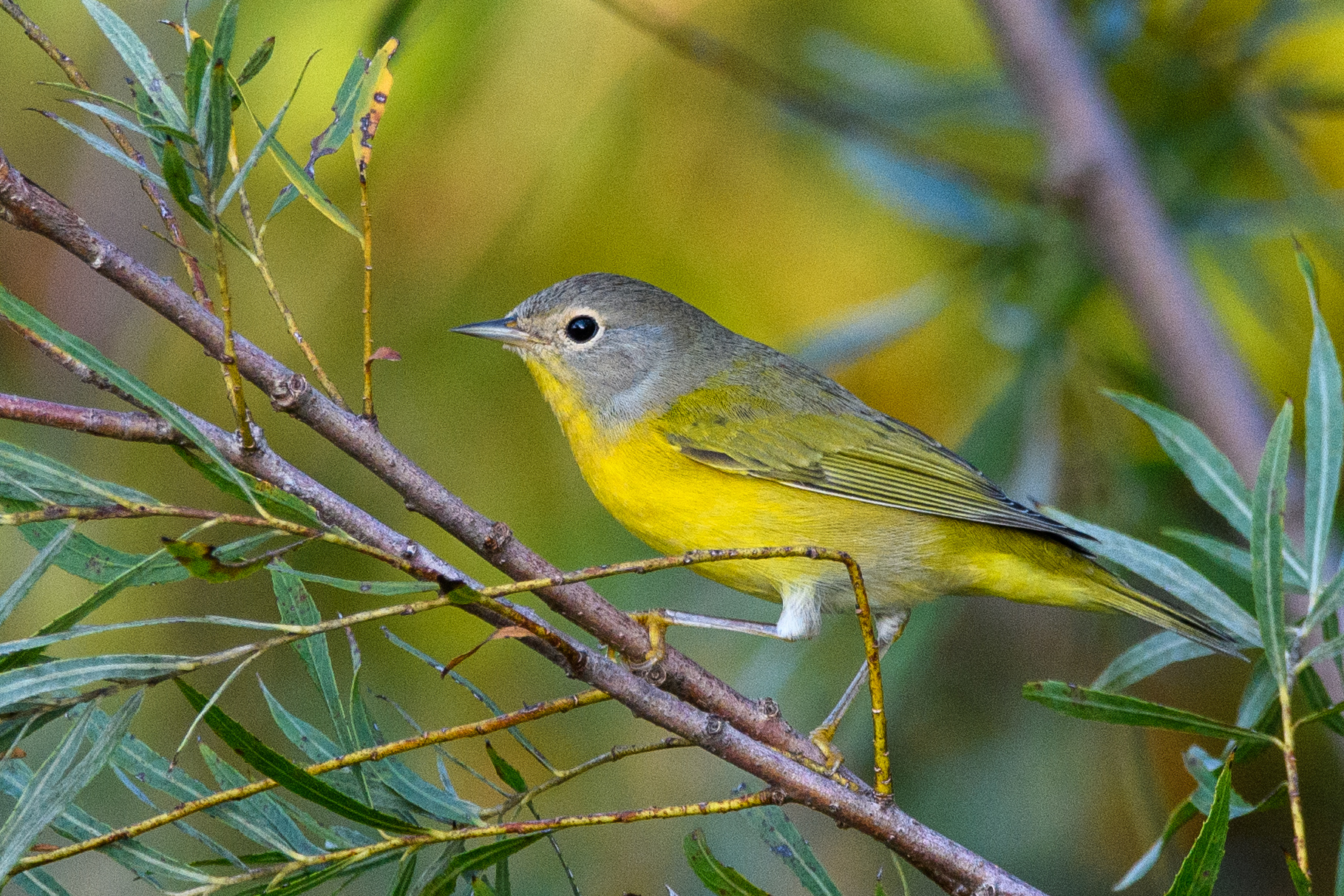 I look forward to the month of September almost as much as the month of May for the exact same reason: Songbird Migration! In May, many species are in colorful breeding plumage. In Fall, some of these species lose the bright colors in favor of more subdued camouflage. I always enjoy the challenge of identifying fall songbirds, while craning my neck to locate them in dense foliage.

This month, I am extra-excited to find migrant songbirds. It is my first opportunity to find and photograph small birds in action with my Nikon D500/Sigma 150-600 mm lens. Also, Spring Migration in Michigan was weak. It seems many migrants elected to go around the state, rather than through it. I’ve spoken with many birders over the summer, who experienced the lack of migrants in Spring. Although it appears the songbirds chose different routes, taking advantage of weather patterns to ensure a successful trip to their breeding grounds, I couldn’t help but feel concerned about the health of the bird population as a whole. Seeing a lot of warblers this Fall has been relieving, to say the least!

I’ve been able to spend most of my time birding close to home, almost always coming home with a nice “catch” of migrants and a few great photos. Being a birder by nature, I try to prioritize identifying the birds before photographing them. I probably miss an opportunity here and there, but I feel much better knowing what’s flitting in the trees around me.

Early in the month, I took a couple mornings to bird the massive Ross Coastal Marsh Preserve managed by the Michigan chapter of the Nature Conservancy. Still shooting in aperture priority and in jpeg, I wasted several excellent opportunities to capture a male Black-throated Blue Warbler on camera. After a couple disappointing visits, I quickly took a crash course on RAW photography and began to play around in manual mode. Over the coming days, I was able to capture some of my best photos ever!

On my last visit to Ross on Sept 10, 2021, I found several White-eyed Vireos. Although annual, the White-eyed Vireo is considered relatively rare in the state. Noteably, I observed this species at the exact spot on the exact same day in 2019!

Early September brought in a noticeable number of Bay-breasted Warblers to the SW corner of the state. I positively identified 12 BBWA in one morning at Wolf Lake State Fish Hatchery. The following weekend, I had a similar experience with Tennessee Warblers. In the meantime, I watched the Yellow Warbler numbers dwindle to nothing, apparently on their commute south.

Cape May Warblers have also been steady this month. I picked up 3 individuals at Ross early in the month and a couple at the Hatchery this past weekend. This is a species I think goes under my radar, probably misidentifying or completely overlooking them in the field. Some individuals are really drab, and can be passed off as Yellow-rumped Warblers or a Sparrow if not seen well.

I’ve also seen and photographed more Philadelphia Vireos than ever this month. I am typically lucky to find one per fall. Maybe two, if I’m lucky. I’ve had more than a dozen encounters this month.

Paw Paw Prairie Fen Preserve has been hosting a few Wilson’s Warblers and can be consistently be seen on the south side of the man-made pond, especially for those who choose to stay in one spot for a period of time.

I got some killer shots of American Redstarts. I’ve always found this particular species tricky to capture in camera. They have a somewhat erratic feeding style and it can be hard to “predict” what their next move will be.

This past weekend, I began to see a smattering of mid/late-fall migrants. I found a pair of Yellow-rumped Warblers in a willow tree at Wolf Lake and several Lincoln’s Sparrows at the Allegan SGA’s Farm Unit. I expect to find my “First of Fall” Orange-crowned Warbler any day now.

I bumped into what some photographers may consider the “Holy Grail” of warblers at Paw Paw Prairie Fen Preserve on September 12th. I flushed a Connecticut Warbler from a patch of goldenrod on my way back to the car. It perched nicely in a nearby oak for roughly 90 seconds. I managed to get some photos off, but had no time to adjust my setting to photograph the bird in the shade. Fortunately, I was able to salvage some of the photos with Adobe Lightroom, and create a somewhat “artistic” look to the shots I obtained. A couple other birders were able to see the bird through the 15th of the month, but I think I got the best look at at!

Another highlight was an early morning encounter with a Great Horned Owl at Wolf Lake Fish Hatchery. This was my 199th species observed at this location. I can’t wait to see 200!

It’s looking like it will be another irruption year for Red-breasted Nuthatches. Stock those feeders! I’ve seen one or more almost every time I’m out!

There is still 2 weeks left before almost all the hummingbirds head south. I’ve been able to get a few shots this fall.

That’s pretty much a rap on my “Fall” birding for the first 2/3 of September. I expect the Warbler diversity to begin diminishing as the month moves on, and we hit a patch of much cooler temps. So far, September has been a rather warm month, often in the mid to high 80’s. There’s still plenty of time to get out there and find your own flock of warblers. Personally, I always enjoy the first weekend in October. There are still lingering early-fall migrants mixed in with the first late-fall arrivals, creating a “sweet spot” for overall diversity. I typically record my highest species counts for Van Buren County around October 4th.