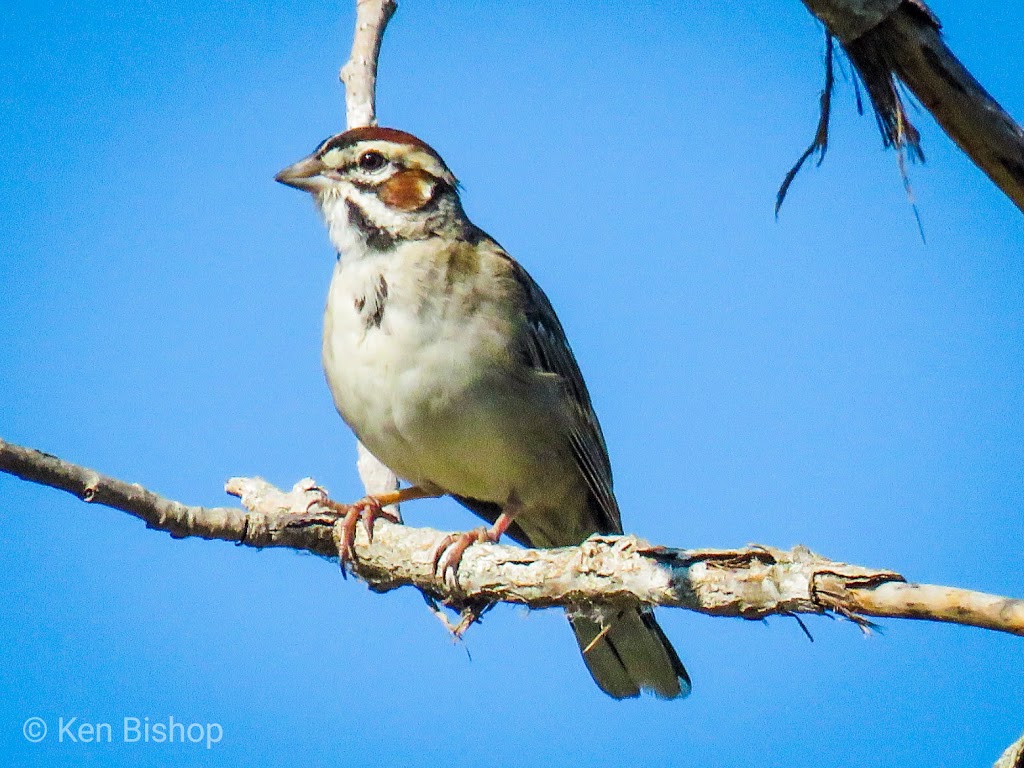 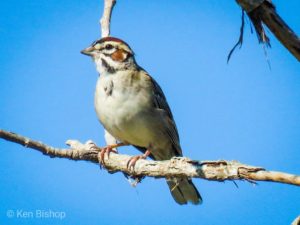 It has been awhile since I’ve set my alarm to 3:15 AM in order to get an early start on a chase bird. Perhaps, the first time I have done so this year. After doing a 2018 Big Year for the state of Michigan where I racked in exactly 300 species, I decided I would “take it easy” this year. For the most part I have stuck to my guns and focused on the 6 or 7 counties closest to my home in Mattawan,Van Buren County. And the birding has been exciting with a number of really good rarities showing up in my corner of the state. White-faced Ibis, Western Tanager and Barn Owl in Kalamazoo County; Tufted Duck in Allegan County; Vermilion Flycatcher in Van Buren (I feel like I am forgetting 1 or 2 others).

Being a few County ticks away from my year goals (100+ species in all counties bordering Van Buren and 200+ for Kalamazoo and Berrien), I felt I needed a break from County birding. For me, the itch to chase a rarity is always present. To get it out of my system I planned to chase not 1, but 3 rarities!

My first target was the Black-bellied Whistling Duck being seen at the American Center Marsh in Southfield, Oakland County. Because of this particular bird’s habit of flying off early in the morning to feed and returning in the late afternoon, I needed to get to the spot as early as possible. The alarm was set to 3:15 AM and pretty much rolled out of bed and hit the road. I arrived on site at 5:23 AM. The eastern sky was just starting to show a little light. After walking into a couple spider webs on the boardwalk, I was forced to turn on my flashlight. Good thing as 8 or 9 large spider webs stretched across the boardwalk.

As soon as I stepped into the area where the BBWD has been being seen, I flushed it. Pure speculation, but it must have been roosting on or under the boardwalk, and my flashlight must have startled it. As it took off I could hear it whistling and could make out the bright white wing-stripes. It flew towards the Cemetary and then veered hard right before being lost in the dim light. Hoping it would come back, I waited around for some time, but it did not return. I saw a number of species including a Black-crowned Night-Heron. I was a little miffed I wasn’t able to photograph the duck, but I have included a couple photos of Black-bellied Whistling-Ducks I saw at Ensley Bottoms, Tennessee in September of 2018. 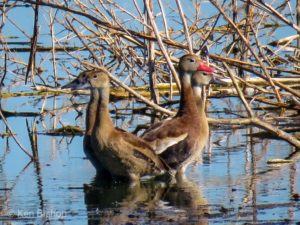 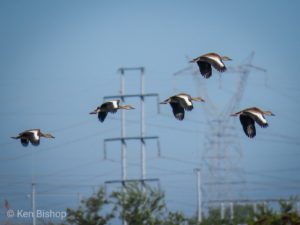 My next target was the Lark Sparrows at Ives Road Fen Preserve in Lenawee County about an hour southwest of Southfield.

On my walk to the spot these sparrows have traditionally been seen, I picked up several great birds including a Northern Mockingbird, Orchard Oriole and a Black-billed Cuckoo (photo below). 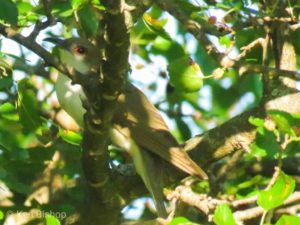 I spent about 45 minutes around the location south of the ponds looking and listening for Lark Sparrows without any luck. I bumped into a local birding couple and explained what I was looking for. It always pays to talk to other birders, because they gave me 3 additional spots to check! With renewed vigor, I set off on the paths north of the ponds. A Common Yellowthroat chased me down the path for a ways. 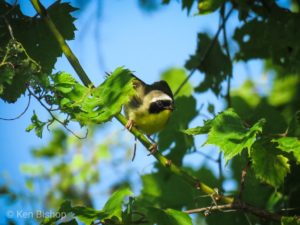 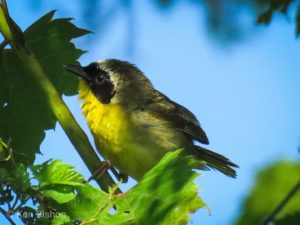 I explored all the paths north of the pond, but no sign of the Lark Sparrows. I decided I would give it one last shot at the traditional spot. As I was walking down the two-track I thought I could hear a Lark Sparrow singing down in a sandy depression  with light vegetation and some young trees. I slowly made my way to the area I thought I heard the LASP, but never had to make it that far. A pair of Lark Sparrows flushed into a nearby tree, offering excellent views. The male was very cooperative and seemed comfortable with my presence, taking the time to sing and preen. 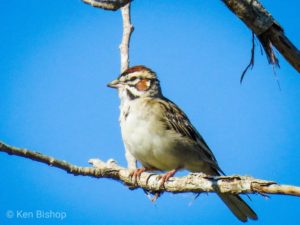 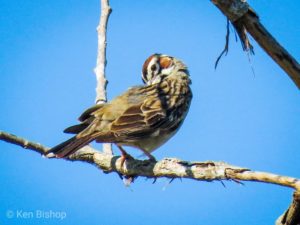 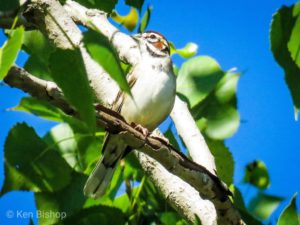 With a lot of time to spare for my final chase, I took backroads back to Mattawan. I arrived at home around noon as was able to enjoy lunch in the AC. Around 1 PM, I set off again towards the lakeshore to get a glimpse of the Bell’s Vireo being seen and heard at the Renaissance Athletic Center in St. Joseph, Berrien County. As soon as I arrived I could hear it singing, although it took me some time to realize it. My previous experience hearing Bell’s Vireo in Kankakee Sands, Indiana was a more complex song used to attract a mate. I was only able to get a fleeting glimpse of the bird, but I was satisfied. I returned the next morning to get a better look. 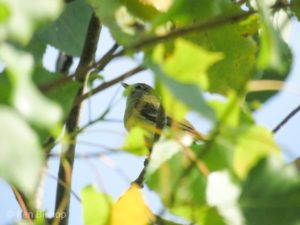 Not much of a photo, but diagnostic. Here are some photos of the bird I saw at Kankakee Sands, IN. 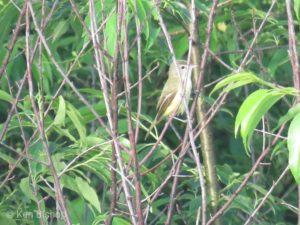 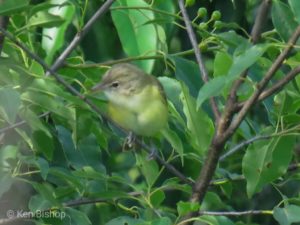 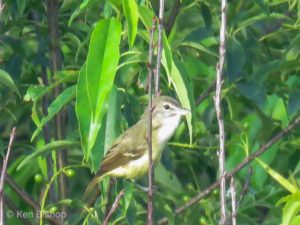 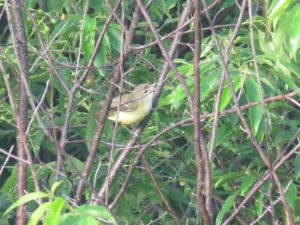 The Rest of the Weekend

I kept it pretty casual on Saturday with a short stop at the Bell’s Vireo Spot. As I pulled out of the drive I heard a Marsh Wren for Berrien bird #198. A first time visit to Sarett Nature Center yielded me the Yellow-breasted Chat and a Yellow-billed Cuckoo hitting 200 species for the county right on the head. 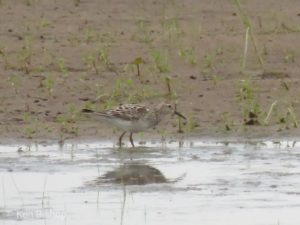 Today, I made a quick trip to Cemterville Wastewater to see what shorebirds may have arrived. Oodles of Killdeer, but 10 Least Sandpipers, 7 Spotted Sandpipers and 2 Solitary Sandpipers made the visit worthwhile. In addition I picked up Wood Thrush for St. Joseph County bird #129. 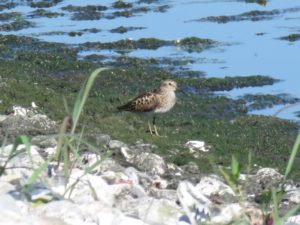 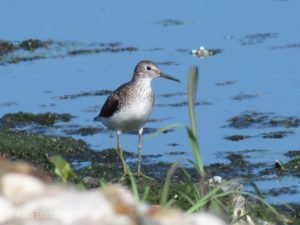 I had a lot of achievements in the wake of three successful chases!

In addition, I surpassed the 3000 total county tick mark, and I am one county tick away from reaching my goal of 100+ species in all counties bordering Van Buren. I need 1 species for Cass County.